Matty had his second Berkeley interview this morning, so while we went to that Andy loaded up his car and drove Davy out to Fort Wilderness at Disney World to get our camp site set up.  The Cub scouts go on two camping trips a year and this is the second one.  Andy set up our tent next to Garrett and Caiden, let the fun begin!

Our first outing was to the fishing pond.  There was a competition for the boys and a prize for whoever caught the biggest fish, well our boys didn’t catch anything and quickly decided that the pool was where they wanted to be.

This pool was perfect for the kids.  There was a larger pool with this large slide and then a smaller pool for the littler kids.  After the swim, the boys dried off and we went for a bike ride.  Our first stop was to the front of the campground to see the horses.  Matty loves the horses.  Next, we biked back over to the Meadows swimming pool.  Caiden was in an archery class, so the boys each got a Mickey ice-cream and posted up to watch him.  From the way their faces look, I’d say they liked them :).  From here we biked down to the marina.  Both boys wanted to go on a boat ride, so we hopped onto the shuttle for the Magic Kingdom and went for a ride. 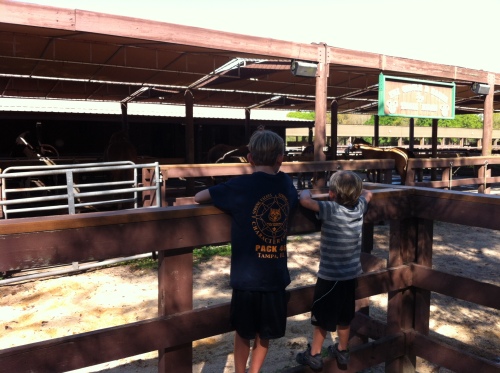 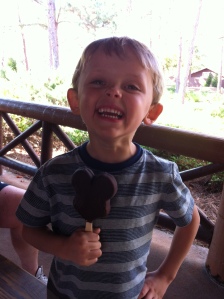 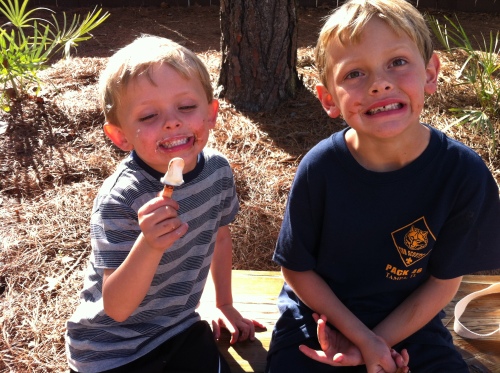 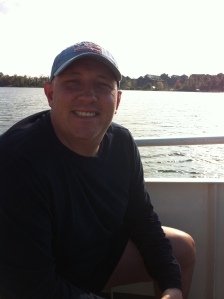 When we got back, the boys wanted to play at the playground, so I ran over to Crockett’s Tavern to grab Andy and I a beer. I picked for him one called Napa Smith, an organic IPA, and Andy said that he officially thinks that this is his new favorite beer.  For dinner back at the campground we had Jack Daniels BBQ pork sandwiches, baked beans, corn, apple sauce, and smore’s. 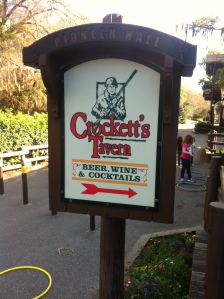 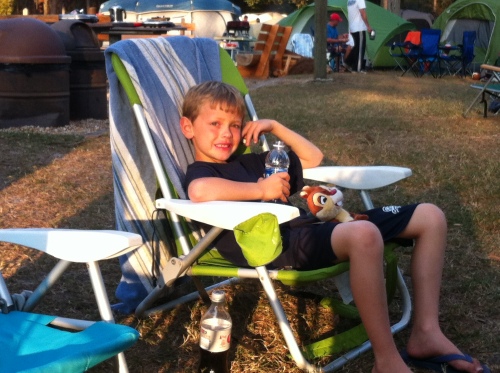 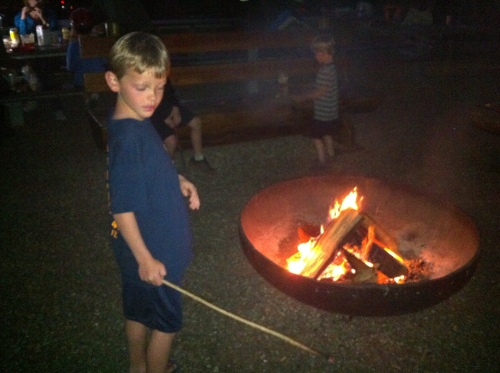 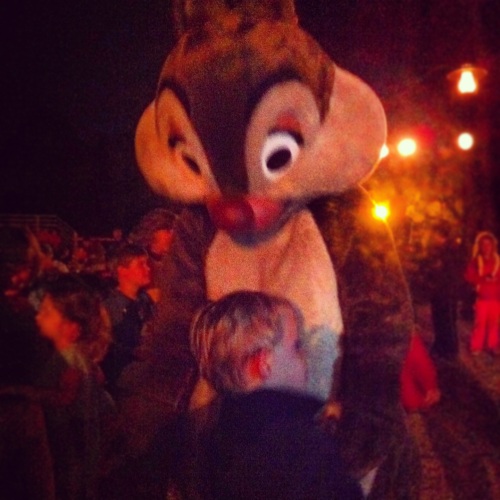 After dinner we headed over to Chip and Dales Campout.  The boys got to meet Chip and Dale, sing-a-long with the show and afterwards watch Toy Story 2, the movie under the stars.  Right before it ended we walked back down to the marina to get ready to watch the fireworks.  An employee told us to take the dirt path to the right and wander down until the opening that the view of the fireworks was much better than from the dock, and he was right.  We had a perfect, clear view of them.  I loved this moment.  We took the purple bus back to the camp ground and called it a night around 10:30.  It was a perfect family day.  🙂

It’s Father’s Day weekend and while planning out the menu I decided on some oven baked ribs.  Andy loves ribs and it has been a while since we have made them, so this was perfect.  We are watching the US Open golf tournament so getting these in the oven in plenty of time turns out to be no problem at all.  In this recipe I used an already made sauce that we picked up in Georgia.  No need to get super creative today, and besides everyone knows how much we love to buy BBQ sauces from mom and pop shops on our vacation adventures. 🙂

On a large piece of foil place ribs.  Rub liquid smoke over the meaty side.  Combine all dry rub ingredients in a bowl and rub 1 teaspoon of the mixture on each side of the ribs.  Place ribs meaty side down and wrap up in the foil.  Refrigerate for 8-24 hours.

Heat  oven to 250 degrees.  Keep ribs wrapped in foil and place them on a large cookie sheet or in a roasting pan to catch any juice that may leak out.  Bake for 3 hours.  Remove ribs, open up the foil, and brush with favorite BBQ sauce.  Leave the ribs open and return to the oven for another 30 minutes.  Sauce will glaze over.

Once ribs are down, add extra sauce if desired. 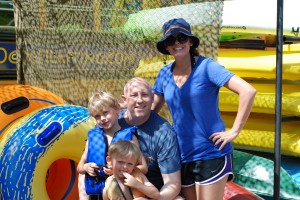 We started our day by stopping at Mercer Orchards.  They are one of the largest orchards in the area and known for their “u-picking” and different jams, jellies, and butters.  Currently, they were picking strawberries and the blueberries were expected to be ready by the end of the week…so we decided to pass and instead browsed through their gift shop.  We bought some old-fashioned peach butter and some peach butter with honey.  On the way back to the truck, Andy noticed that we had a flat tire.  Uh oh!  So, he ended up calling AAA and waiting while the boys and I went on a tractor ride through the orchards.  We saw apple trees, peach trees, cherry trees, pecan trees, strawberry plants, blueberry bushes and more.  By the time we got back the tire was changed and we were on our way! 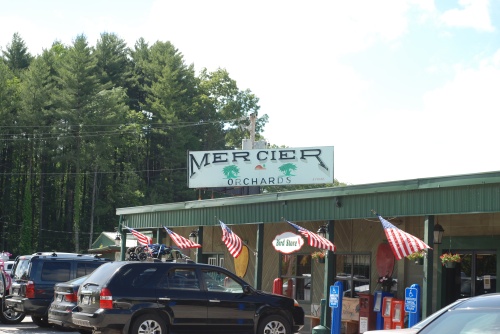 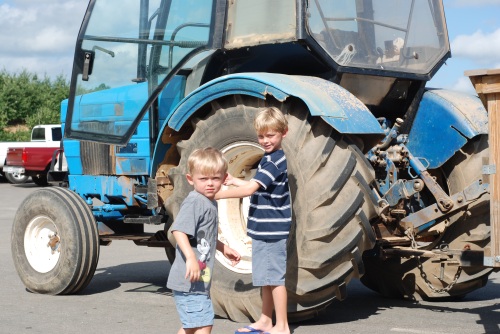 From here we drove over to McCaysville to go tubing.  We found a company that didn’t have a minimum age requirement, perfect for Matty.  It seems that most of them require that the children be 5, but Matty is awesome and can do anything!  The Toccoa River Adventures offered floats for $6 per person, cheap outdoor fun!  We decided on the short float which was about and hour and forty five minutes.  The boys had a great time.  The water was cold, but not to cold…. Andy and Matty even braved it in to do a little swimming. 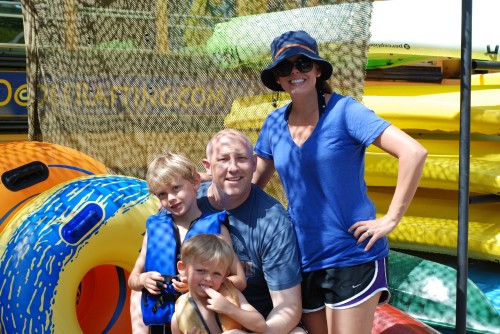 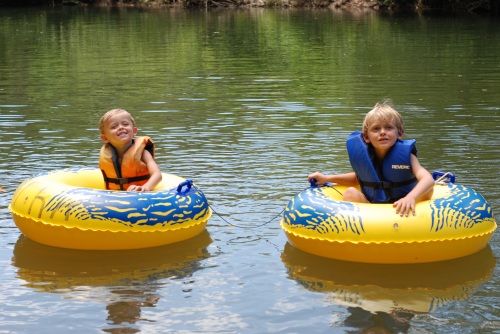 For lunch we headed back to Blue Ridge and ate at Blue Ridge Mountain BBQ.  It is another walk up BBQ place that has a lot to offer and delicious food.  After lunch we promised Davy that we would take him mining for gems.  That was his one request on this trip, so of course we had to find a place.  Right off of the main street there was a place called Huck’s Lost Mine.  The large buckets were $25 and it came with a round of mini golf for two.  The bucket was packed full of treasures and the boys had a great time playing in the mud.  We wandered over to the ice cream shop and then took off south for a quick hike at Fall Branch Falls to end the day. 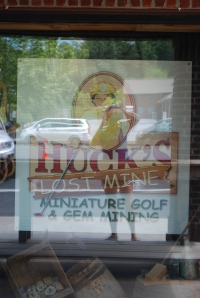 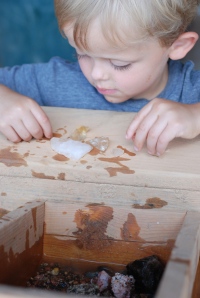 The hike was only about a quarter-mile and it let you walk right up to the waterfall.  At the bottom of the hike, across a small field, there’s access to the creek for the kids to play in. 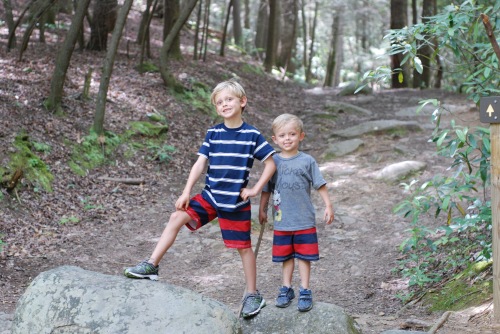 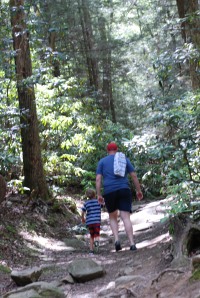 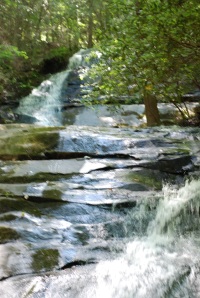 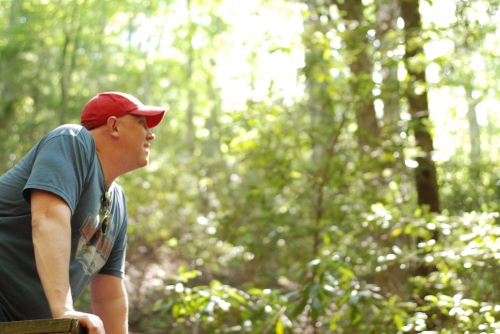 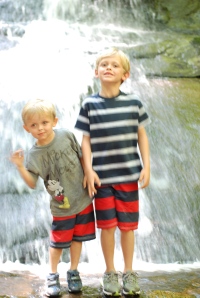 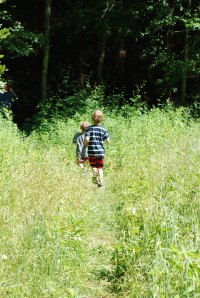 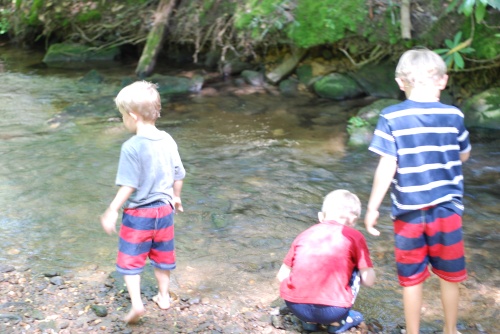 It’s Memorial Day today, and nothing says summer holiday more than an outdoor BBQ.  Andy fired up the grill, threw on some hot dogs and burgers, and pulled out this month’s issue of the Food Network Magazine.  This issue featured 50 different burger recipes.  The one that Andy picked to try was the Chipotle Burger and then we got creative and came up with the Cuban Burger.  These were easy, cheap, and creative ways to break away from the original Hamburger.

Tip:  When grilling the burgers don’t flatten them with a spatula to try to get them to cook faster, they will lose their juices and flavoring…instead put the grill on medium heat and show some patience.

For 10+ years I have been trying to grow tomatoes.  My first attempt was my senior year in college.  I had moved into a new apartment that had two patios and I wanted to make a beautiful patio garden.  I had the bright idea to buy seeds, a large plastic planter, dirt, and a tomato cage…and then Voila! I just knew that large plump tomatoes would grow.  Boy was I ever wrong.  They did grow small seedlings, but at about 3 inches they shriveled up and fell over; so much for that.  Next, we lived in a garden apartment in Chicago.  Andy bought me a beautiful rectangle planter for outside our front door, but in the end there just wasn’t enough sun to really keep anything growing other than herbs.  Lastly, here we are back in Florida and up to this point every year had the same ending…nothing more than a few small tomatoes that split and rot before they even seemed to fully ripen.  So imagine my surprise when this year I make a last minute decision at Lowes to buy 2 tomato plants for my front door planters and within in a few weeks I have dozens of small tomatoes!!!

Historically, I have not been a huge fan of the small Cherry tomatoes and in that quick decision if I had looked a little closer I would have seen that that is what I was buying…but surprisingly they have been pretty good and Andy loves them.  Maybe it was the planted location, or the amount of water given, or the type of tomato…I’m not sure, but it doesn’t even matter because I have officially grown tomatoes.  So far we have added the tomatoes to salads, mozzarella, risotto and most recently the recipe of the week: Zipper pea and Cherry Tomato Bruschetta.